In July 2011, which marked the 240th anniversary of Gray’s death in 1771, The Stoke Poges Society decided that his tomb and monument were in need of major repair and restoration.  Within a year, with a successful application for a Heritage Lottery Fund Grant, a generous donation from the John R Murray Charitable Trust, the Mobbs Memorial Trust and other fundraising activities, the required £19,000 was raised. The firm of Cliveden Conservation, specialists in the restoration of ancient buildings, was chosen to carry out the work, which commenced in April 2013. Click here to see gallery of related pictures.

Next to the Gray tomb is a similar one and interesting in that it also contains the remains of a mother, namely Sara Duckworth, widow of the Revd Henry Duckworth, who had been the Rector of Stoke Poges in 1754. Similar to the Gray tomb in design, it had also been organised by a son, Admiral John Duckworth. The inscription, in Latin, was very degraded, and even after restoration virtually undecipherable, until the conservators filled it with red brick dust, which revealed it.  (click here to see it).

As well as the specialist work on the stonework of both tomb and monument carried out by Cliveden Conservation, large numbers of local volunteers engaged in the clearing of the area around the monument which had become very overgrown. This was followed up with the planting of hundreds of spring bulbs and wild flowers.  The Monument is now beginning to look like it was originally (click for 19th century view). 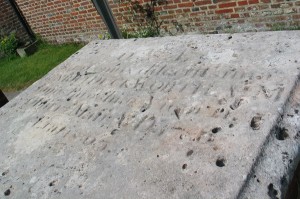